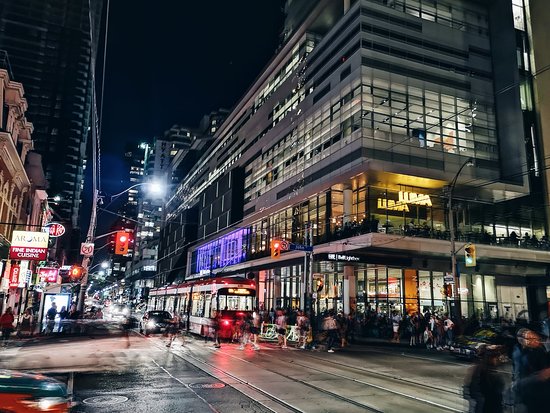 It’s the beginning of September in Toronto, which heralds the descent of hordes of wide-eyed youths alighting on Bloor Street – no, we don’t mean U of T frosh, but another set of ingenues: the TIFF celebrities. Yes, it’s that time of year again, the time when you can look up from your morning Starbucks run to see Ryan Gosling, or when you might see Kiera Knightly as you bike along King Street. For those not looking to take anything to chance, here are a few of our top picks for star sighting this year at TIFF.

There are the classics: The Four Seasons, the Ritz-Carlton, the Shangri-La. If it’s a fancy (or Ritzy, as it were) chain, it’s a good bet that some celebrities will be staying there this TIFF. In addition to those (and the Hazelton Hotel (118 Yorkville Avenue) in Yorkville), look out for new-ish spots like Hotel X (111 Princes Boulevard) near the Exhibition Grounds and the newly revamped St. Regis hotel (325 Bay Street) in the Financial District. Hotel X is part of a chain by Library Hotel Collection, which has hotels throughout the world, from Budapest to New York City. Its proximity (yet distance) to King West hotspots like Patria, Spoke Club and Portland Variety may draw celebs this year. It’s also brand spanking new, which may help with its cache. The St. Regis, on Adelaide at Bay, is also expected to be a TIFF hotspot, with a Moet & Chandon champagne lounge, extended hours and a portrait studio by The Hollywood Reporter.

Montecito (299 Adelaide Street West) is owned by famed Canadian director Ivan Reitman. The restaurant has played host to multiple TIFF premiere parties and its rumoured that the likes of George Clooney, Angelina Jolie, Kate Winslet and Idris Elba will be making appearances there this week. Its proximity to both TIFF Bell Lightbox and Soho House are also sure draws.

Marbl (455 King Street West) is a steak house, which replaced the space that was once occupied by Susur Lee and Drake mashup Fring’s. It only opened in December of 2018, so it will be new to most of the American celebs that will attend TIFF. It’s also scheduled to host a Nordstrom Supper Suite for the stars, along with hosting press events during the day.

Buca Yorkville (53 Scollard Street) is the uptown (well, not after another outpost opens at Yonge and St. Clair) location of this venerable Toronto chain. The King Street locale is the buzziest of its Toronto restaurants, but our money is on this Yorkville location being the spot to see celebs on a dinner out. Its location is right beside the Four Seasons hotel and residences, which will surely draw some stars not looking to trek downtown.

Patria (478 King Street West) played host last year to two of Canada’s dreamiest exports: Justin Trudeau and Ryan Gosling. We don’t see the Prime Minister making it to TIFF festivities this election year, but Patria should still be a good place to spot bigwigs with a bit less on their calendar.

RBC House (11 Duncan Street) is a private, invite-only spot for celebrities to refresh and chill. Last year, they hosted a HAIM concert, along with stars like Elle Fanning, Cara Delevingne and Elisabeth Moss. You likely won’t score an invite past the velvet rope (but if you do, feel free to invite us!), but if you’re a die-hard fan, standing outside might be a good option if you just need to see some stars.

Soho House (192 Adelaide Street West) is a member’s only refuge from the camera bulbs and flashes. With locations throughout the world (including three near Los Angeles), stars will likely flock here thanks to the house’s “no photos” rule. Like with RBC House, it won’t do much good to try and get in unless you’re already a member, but if seeing a certain celebrity is on your bucket list, might as well try standing outside.

Happy stargazing this TIFF! Oh, and film going too, we guess.